Hoping to stimulate international interest in women’s tennis as the Davis Cup did in men’s, Hazel Hotchkiss Wightman, an all-time champion from Boston, donated a sterling vase to the U.S. Lawn Tennis Association as a prize for such a team competition. It was decided to invite Great Britain to challenge for the prize in 1923 to open the new Forest Hills Stadium at the West Side Tennis Club in New York. With Mrs. Wightman as player-captain, the U.S. won the inaugural, 7-0. The rivalry was rewarding to both countries and initially developed into a close competition, an annual match between the two with the prize soon known as the Wightman Cup. The matches were played in even years in Britain and in odd years in the United States.

Interrupted only by World War II, the series was soon dominated by the United States, which mounted a 51-10 record through 1989, when both nations mutually agreed to suspend the competition due to the British team no longer being competitive.

‘Lady Tennis,’ as she came to be known, remembered herself as a shy, somewhat awed and fascinated college girl when she arrived at the Philadelphia Cricket Club in 1909 for the U.S. Championships. A Californian, Hazel Virginia Hotchkiss hadn’t played on grass, but with her attacking style and rock-ribbed volleying-she was the first woman to rely so heavily on the volley-22-year-old Hazel, a right-hander, scythed through the field to lift the title effortlessly (6-0, 6-1) from 39-year-old Maud Barger Wallach in the challenge round, and won the doubles and mixed as well. 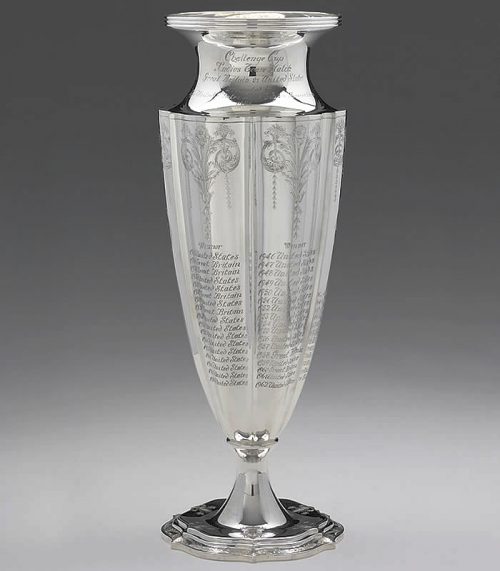 Marrying Bostonian George Wightman in 1912, she didn’t defend. But, responding to a challenge from her father-to win after becoming a mother, a U.S. first- she reappeared in 1915 to lose the singles final to Molla Mallory, and win the doubles and mixed. But papa’s wish came true for the spunky I25-pound 5-footer in another comeback, 1919. At 32, she won her fourth singles title. She lost only one set, beating Marion Zinderstein, 6-1, 6-2, in the final, and reaching the doubles final. Thereafter her long-lived and unapproached success (U.S. adult titles between 1909 and 1943) was confined to doubles, at which she was one of the supremes.

Hazel, devoted to the game in all aspects, generously instructed innumerable players, at no charge, through­out her life, and was able to win important titles with two of her protégés who would join her in the Hall of Fame: Wimbledon, U.S. and Olympic doubles with Helen Wills in 1924; U.S. Indoor doubles with Sarah Palfrey 1928 through 1931. Her second Olympic gold in 1924 came in the mixed with Dick Williams.

She envisioned a team tournament for women simi­lar to the Davis Cup, and offered a silver vase as prize. In1923 British women were the strongest apart from Americans, and Julian Myrick of the USTA decided that a U.S.-Britain competition would be in order for the Wightman Cup. The event, with Hazel captaining and playing for a winning U.S. side, opened the newly con­structed stadium at Forest Hilk. A treasured series, it lasted through 1989, disbanded unfortunately with the Brits no longer able to offer competition.